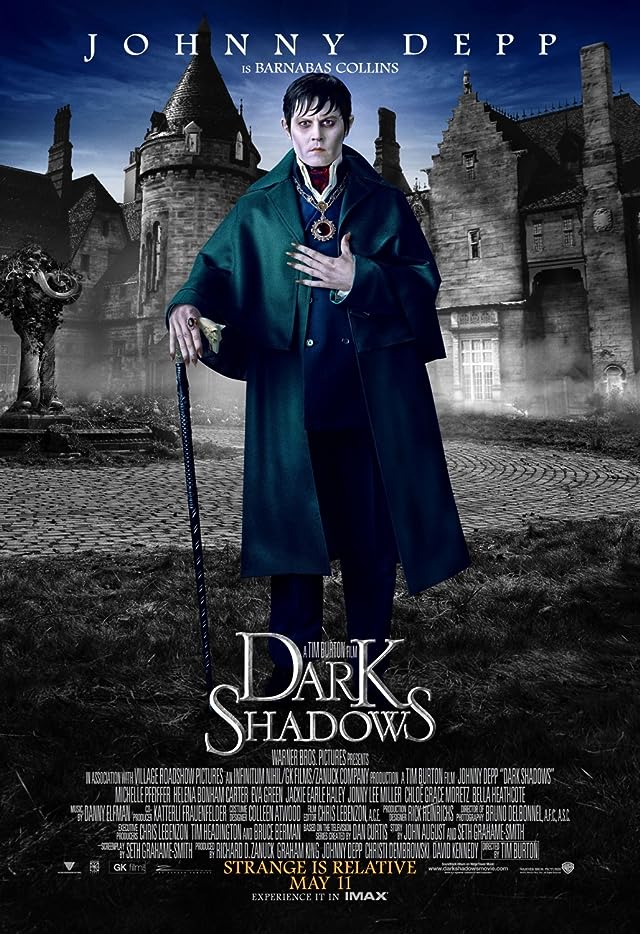 Tim Burton and Johnny Depp have teamed up again for “Dark Shadows,” their eighth collaboration. While the two have made some outright fantastic films (“Edward Scissorhands,” “Ed Wood,” and “Sweeney Todd”), they’ve also made some films that missed the mark (“Alice in Wonderland” and “Charlie and the Chocolate Factory”). “Dark Shadows” lays somewhere in the middle of fantastic and mediocre. The film is stylishly strange in only the way Burton can produce and has some genuinely funny moments, but ultimately “Dark Shadows” plays it safe and simply toes the line of the seriously twisted.

“Dark Shadows” is a big-budget remake of a soap opera of the same name that ran from 1966 to 1971. It tells the story of Barnabas Collins (Johnny Depp), a man who is cursed with vampirism in the 18th century by Angelique (Eva Green), a witch who has revenge on the mind when Barnabas spurns her love for another. She hypnotizes his true love Josette (Bella Heathcote) into jumping off a cliff and leaves Barnabas in a chained coffin six feet under. Jump to 1972 and the coffin is accidentally unearthed by a crew of construction workers, finding Barnabas in a world completely foreign to him. He returns to his Victorian manor, which is in serious disrepair, to find the current dysfunctional Collins family living there: the family matriarch Elizabeth (Michelle Pfeiffer), her 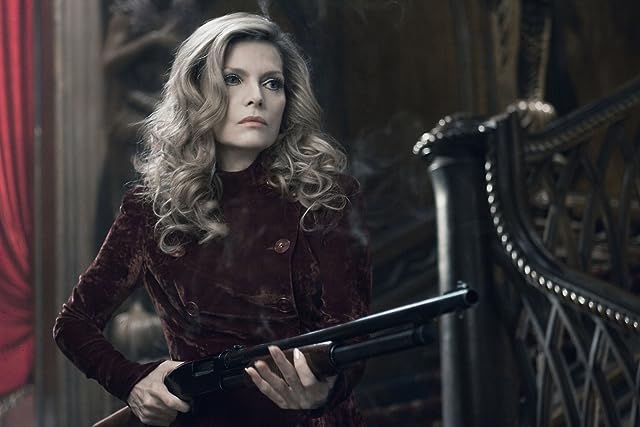 The film looks fantastic and does an excellent job perfecting the dark atmosphere of the original show, especially the surf crashing against the dark cliffs that Josette throws herself from and the gorgeous gothic Collins manor. The strangely hypnotic score by Danny Elfman is a pitch perfect homage to the show and for music fans, expect a fantastic cameo from rock-god Alice Cooper that is sure to make you smile. Much of the film’s comedy is derived from Barnabas’ assimilation into a world he knows nothing about. Paved roads, lava lamps, cars, hippies, and even troll dolls throw Barnabas into uncertainty, making for some pretty funny moments. 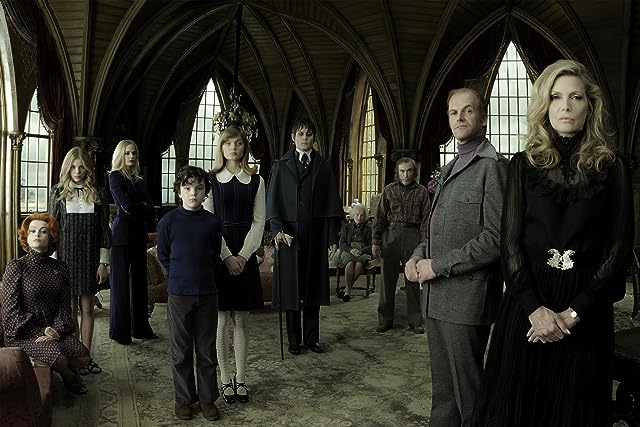 Definitely a strong aspect of the film is the stellar cast, although some stand out far more than others due to weakness within their character’s development. Michelle
Pfeiffer is absolutely lovely as Elizabeth Collins, the matriarch who is trying desperately to hold her family together, all while keeping up appearances of affluence. Jackie Earle Haley and Helena Bonham Carter, both playing hard drinkers, are pleasant enough and get a few laughs of their own. Unfortunately, the wonderful Jonny Lee Miller is severely underused as the dead-beat brother of Elizabeth. He’s simply not onscreen enough but when he is, he steals the movie effortlessly. Also underused is Gulliver McGrath who plays young David, a little boy who holds a strong connection with his deceased mother. McGrath has little to work with but holds enough sadness and isolation within his features that you wish you saw more of him. Playing Elizabeth’s unruly daughter is Chloe Grace Moretz and while she is usually very solid in films, she appears a little forced as Carolyn, a young girl trying a little too hard to be a naughty Lolita. Her character also has the misfortune of a tacked on surprise that’s completely unnecessary. 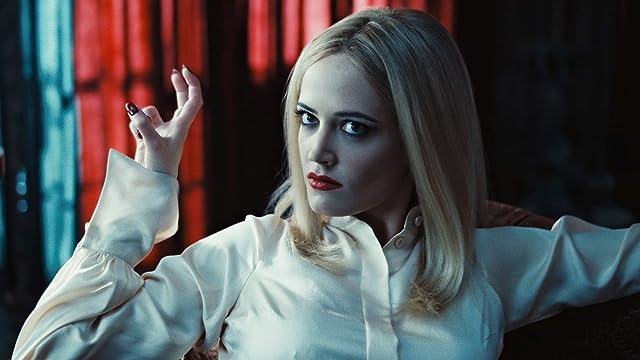 Even with such a large cast, the two that get the most screen time is Johnny Depp and Eva Green. Thankfully, Eva Green is stunning and spot-on as the psychotic, lovelorn witch. With her blood red lips that spread out impossibly wide over her perfectly white teeth in the eeriest of ways, Green is magnetic and her Angelique is a strong and fascinating opponent for the well-spoken vampire.

However, it’s obvious that the strongest in the film is Johnny Depp. It’s a sad fact for the rest of the cast that without him as Barnabas, “Dark Shadows” would be pretty 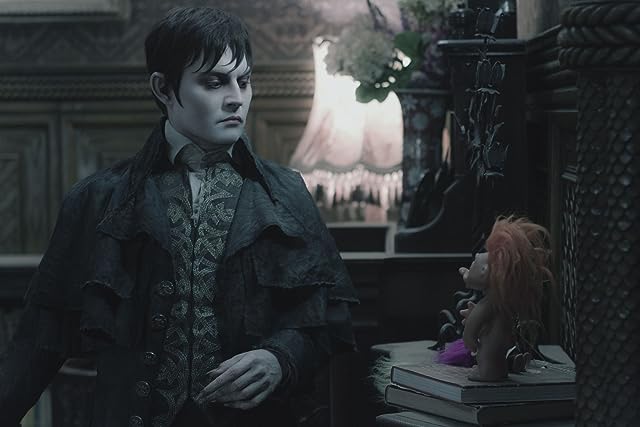 droll. Successfully channeling the original creator of the role Jonathan Frid, who had a cameo and unfortunately passed away just last month, Depp’s Barnabas is delightfully pasty and controlled. It’s so nice to see a vampire with sharp fingernails and pronounced makeup, reminding one of the Nosferatu-style vampires long before the sparkle of “Twilight.” It’s no surprise either that Depp is just as charming and effortlessly fascinating as he always is, infusing humor with facial features and perfectly executed vocal intonations. Barnabas is mainly a reactionary role and that’s something Depp has perfected time and time again, especially within “Edward Scissorhands.” The character is thrown into a strange world and Depp’s reactions to simple things such as headlights, showcases his unparalleled talent to for silent film acting.

However, with everything that it has going for it, in the end “Dark Shadows” is exactly what one would expect from a Burton/Depp collaboration nowadays and that predictability does it a disservice. While watching it, you can’t help but get sick of Burton’s recent penchant for remakes and long for his original stories again, even if he’s just remaking one of his own films, such as the upcoming stop-motion “Frankenweenie.” As far as Depp is concerned, even in the films that may not hold levity, he always delivers a solid and magnetic performance, making it nearly impossible to dislike him. The humor, while effective, is sometimes repetitive and almost lazy. “Dark Shadows” is a movie you should enter into without any expectations and be willing to just enjoy it for what it is, a fun film that may not blow you away, but it will certainly make you laugh.

Mila Pantovich runs her own blog, Reel Obsession, where all of her articles can be found.