Off the Beaten Track — Music Musings and Reviews by Mary Leary

The latest CD from A. Bogs and His Crew

If you like Jad Fair or Daniel Johnston, it is pretty safe to assume you will like Bogs Visionary Orchestra. If you like the Shaggs, it’s even more likely. There are only maybe 135 people in the world who really like Jad Fair, Daniel Johnston, or the Shaggs (and don’t just say they do because they heard it was hip – that would account for maybe 20), and I’ve heard that 14 of the 135 died this year.

I am writing this review because there is no worse, more futile loneliness than that of making art with no place to go. And while BVO is known for jubilant around-NYC performances, it has a right to have its stories told to a wider audience. To me this is partly because the group in no way, shape or form seems to have set out to do anything that anyone beyond those 135-or-so people would like or understand. There is a purity to this which appeals to me.

However, having worked through about 80 percent of my masochistic tendencies, I would not make myself write about BVO if I didn’t like the way it sounds. Because to write a review about anything, you have to listen to it (well, a real review – I tend to eschew sound bite reviews, i.e., “Like Madonna if Beyonce were stepping on her foot in an industrial club at three a.m..”)

Other than, perhaps, Bali, there are few countries that are particularly supportive of visionary orchestras, but BVO has still mustered the energy to make another CD about the world that is so disinterested. That’s good, because downing a Xanax cocktail, then lurking in bed for 20 hours at a time is only fun once in awhile, and should be a punishment for something really bad, not a lifestyle.

Even before A. Bogs and his musical buddies coughed up this new recording they reminded me of my old poet friend, Sparrow, who does things like running for the U.S. presidency by standing on first one foot, then the other, in Tompkins Square Park (sparrowforprez.com). About 15 years ago, he and his wife made a recording, Foamola, that flew much further under the radar than even BVO. Although most of it was untenably dry, I became peculiarly attached to a track entitled, “May I Take A Bath?” I liked it so much that occasionally, when a new friend seemed unusually open-minded, I would reveal this to them, much as a liberal in a crowded supermarket might have anxiously shared their intention to vote for John Kerry five years ago.

“Isn’t it great? Isn’t it funny?” I would say, watching my friend’s face for the hoped-for delighted reaction. Or I would say nothing, hoping that Sparrow’s zen/existentialist brilliance would speak for itself. “I mean, don’t you like the Fugs?” I might add, knowing the battle was already lost.

Hardly anyone I’ve ever met has enjoyed “May I Take A Bath?” as much as I, but then, I also get a charge from these releases called Incredibly Strange Music, Volume One of which includes a version of “Flight Of the Bumble Bee” played at such a screeching-tire velocity, the guitarist must have been downing double espressos, 24/7, for weeks.

I could try and lure Iron and Wine fans by pushing the fact that two of BVO’s central members have dark, thick beards, appearing somewhat likely to stare for a long time at their shoes. However, those people would then be angry when they realized that, other than the beards, BVO isn’t anywhere near as dull as Iron and Wine. Also, a lot of Bogs’s music is really lively. It even sounds like the members are having fun.

“I Believe,” which starts Mean Old World, has rather Beatlesque harmonies and seems to be about longing for justice and other nice things, and this having something to do with believing in a god; which is rather Daniel Johnston-ish. Along with nearly everything else here, it shines with a knowing innocence — BVO is able to chuckle ruefully at its own idealism. On tracks like “Can’t Stop Wearin’ A Gun” the group flirts with uneasily resolved conflicts — to me, one of the most interesting directions for art and thought.

How these people are different than Jad Fair and Daniel Johnston: There’s a darker, prettier room in the BVO house, because of the harmonium and cello on some songs, and generally richer tonal inclinations. Most songs are framed in seminal country-western, dance hall, and folk structures. More than the many contemporary groups who do so with less sincere ingenuity or humor, BVO at its dance-hall best recalls at least echoes of the sublime Canadian duo, Fraser & Debolt, whose LP With With Ian Guenther reemerged from out-of-print obscurity two years ago (http://fraserdebolt.com/audio.html). 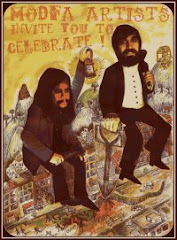 “Unemployed” is a sprightly little circa-1900-style composition expanding on the possibilities in the situation. Its ragged/bouncy lilt recalls some of the earnestly strange approaches to folk, especially one by the Residents, on a sublime Ralph Records compilation, Potatoes (no link here, as I recommend hunting down the out-of-print LP version). “No Escape (from doom)” which veers surprisingly close to Band territory, is lovely. So I’m hardly surprised when the next track, “Homeless On The Street” — is as quietly compelling as some of John Lennon’s post-Beatles songs.

I think I could actually get a new friend to listen to this CD. Of course, most of the people who are drawn to me think I’m pretty different. “Different than what?” I sometimes wonder. But what I hope they want is that sense that something genuine and possibly unexpected might happen, then be followed by a nice Sunday dinner, after which we will watch a film, perhaps Me and You and Everyone We Know, that leads us to reconsider several things we previously thought we knew.

One of the tracks on this recording — “Forlorn II” has the kind of heels-in-the-air joy the Roots festival lost a few years ago,when all the old timers got too old or dead to make it and started to be replaced by people too cool to be so uncool they’re cool. That’s something I don’t even know how to explain, but if any of this sounds good to you, you probably understand, and might even like Mean Old World, which is a bit more country dance-hall than its slightly more Emo/contemporary predecessor, Maladroits Union, which I also like very much.

The only thing keeping me from all-out raving is the scratchy vocals, which are part of the reason for comparisons with Johnston and Fair – an acquired taste, for those willing to listen beyond surfaces. There’s also some room for sonic maturation, perhaps to include a greater merging or expansion from basic structures. BVO have not made a great record, but they have made a very good one, which doesn’t sound exactly like any other at the moment.