Off the Beaten Track – Music reviews and musings by Mary Leary

After being intrigued by online samples, I was somewhat disappointed by my first couple spins of Seas & Trees. My interest plummeted further when I read the J-card narrative about a allegorical journey including such figures as El Gazali (“the greatest Fabulist ever told”), Neptune, Julia, Spadefoot, and an elephant named Jumbo. If I’d been more enthused about the album I probably would have just written off this inconsistent whimsy. Even if Brown’s work is on a whole different level, than, say, the mythical band in Spinal Tap, some of that film’s giggle-inducing scenes epitomize the latitude often given, or begged, by musicians.

Turned-off, I put the CD aside. That’s a shame, as it might have meant the end of my listening relationship with Brown. However, once I’d put some space between myself and the CD, I felt there was considerable value in Seas & Trees. The trick has been ignoring the accompanying story as if I’d never seen it, and returning to Square One.

That took me to: “The best of this reminds me of some of John Schaeffer’s ‘New Sounds’ radio show,” which I’d discovered in New York City. When I got home too late for it I often missed Schaeffer’s programming of groundbreaking audio offering intellectual or, dare I say, psychic stimulation. Within the next few years I became accustomed to listening to Terry Riley, John Cage, or Gavin Bryars. I never knew what I might write, cook, or simply think in response.

Ms. Brown has been developing the art of loosely capturing and mixing evocative, ephemeral sounds. As she says on CD Baby: “Most scores are a capitalization on chance with attention to impulses and intentions without attachment.” My translation: The space from which a lot of great art is born. It’s courted by many creators, from the most sales-oriented hit writer to Marcel Duchamp, whether or not they feel compelled to spell out the process. However, Ms. Brown had the chutzpah to enter the ambient/experimental/field recording genre, where such explanations often accompany the territory.

I think over-analysis or explanation belabors points about which Ms. Brown shouldn’t have to concern herself. The woman is a highly intuitive, accomplished, and aesthetically exacting player and composer. Unless she’s including outlines as part of a courtship with arts grants, this skin may drop away or become more naturally believable, as her oeuvre develops a wider profile. Although she’s backed and opened for a roster including Sparklehorse, YoYo Ma and Calexico, Seas & Trees is the first widely-available CD with Brown at the helm.

To my ears, her somewhat deceptively serene tracks chart integral esoteric and visceral pathways, and while the trip isn’t always sublime, I think it’s worth booking passage. If the vagary in that annoys you as much as I can be annoyed by vagaries, I suggest ordering the CD, listening to some samples, or, to be more succinct, simply moving along.

I’ve seen enough performers quoting a southern blues/rock sound with tongues at least partly in cheek to be pleasantly surprised by something that comes across as “the real thing.” Such is the case with the Reddans, who’ve been causing a stir by participating in Levon Helms’s Midnight Rambles and backing Popa Chubby and late New York-based guitar star Bill Perry.

John Reddan’s raw electric guitar drives some serious roadhouse swagger on Skeleton Key Sessions. The only glaring problem, for me, is the sameness of the vocals, all of which are carried by John. This is remedied on one of my favorite cuts, “Halloween Song,” employing effects rather like those used by R.L. Burnside. And although I hear “A Fast World” has been getting the most play, my other picks, “Wherever You Go” and “I Beat The Dealer,” really s-l-o-w the strut into something monumental, rather like Felix Pappalardi or the Allmans. Other comparisons include Joe Walsh and Eric Clapton. The one that really floors me is on the band’s own list of influences: Danny Gatton. While the Reddan’s sound is much heavier and thicker, there could be no better a citation of roots music scholarship. John shares some of his guitar collection before delivering some blistering axemanship on the video below. 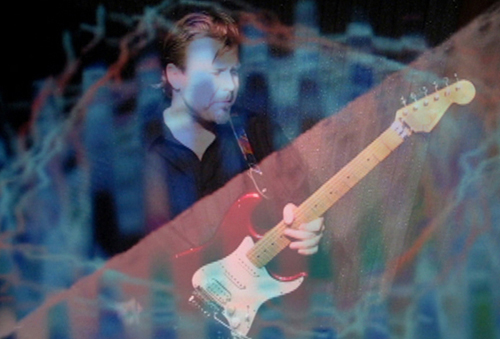 I’m listening to this CD for nearly the third time (first one and a half, I was playing a video game) and wishing I could say I love it. For one thing, I’d like to get behind Franklin’s espousal of world renewal, environmental consciousness, and global/personal evolution.

I should allow that Mr. Franklin and I have considerably different leanings. For instance, on his website he shares that Joe Satriani’s Surfing with the Alien would be one of his five desert island picks. Me, I’d rather be taken out and shot than stuck anywhere with Satriani as one of my only choices. It reminds me of that part of the Young Ones “Boring” episode when demons torture a man by forcing him to wear headphones blasting nonstop Barry Manilow.

That image aside, at his best Franklin channels the rather sophisticated pleasures of Bob Welch, Steve Miller, or David Gilmour. “Disappear (Only One World”) suggests the feel of Santana’s “Smooth.” Two of the more uptempo numbers, “For the World to See” and “Summer,” inject pinches of spice. Unfortunately, the album is bogged down by a predominance of structurally predictable, mid-tempo songs (allowing Franklin to stretch out with long guitar runs) and by his densely multi-tracked tenor. If more cuts sported the ethereal ease of the Pink Floyd-influenced “This Day,”I might be singing another tune. I imagine there are guitarists who will be impressed by Franklin’s ability to emulate Satriani and Santana’s clean lines.

← Previous Story Jeff & Jer’s morning “Showgram” off the air at Star 94.1
Next Story → Keeping it Local with 91x’s Rowley — The move to OB and the “Paddle for Clean Water” Festival