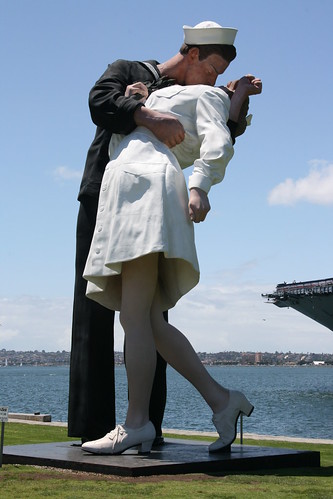 The 25-foot tall statue of a sailor-kissing-a-nurse, aka, “Unconditional Surrender,” located next to the USS Midway, is a giant replica inspired by the iconic photograph taken on V-J Day in Times Square back in 1945.

The modern version of “Unconditional Surrender” would have to be the infamous photograph taken of a kissing couple during the riots after the Canuucks’ Game 7 loss to the Boston Bruins in Vancouver last month.  The mysterious couple, who were later identified, captivated the world with their epic kiss as a line of riot police and a raging fire closes in behind them.

The special moment shared between Alexandra Thomas and Scott Jones, who was later identified as the kissing couple during the Vancouver riots, quickly went viral on the internet after the image was released, and went on to capture the hearts and imagination of an entire nation.  Watch footage below:

Like the iconic image that photographer, Rich Lam, took for Getty Images on the night of the Stanley playoffs back in June, the mysterious photograph taken by Alfred Eisenstaedt the day Japan surrendered was a wonderful snapshot that, too, showed the mood and spirit of a nation after a momentous event.

In other words, a picture is a worth a thousand words, but what about a work of art?  Shouldn’t a painting conjure up more than let’s say a thousand word article, which is way over the word count of what some newspapers were able to come up with in order to produce a piece of the most recent epic embrace.

“Surfing Madonna” in Encinitas and “Stabbing Poseidon” in OB

The story behind the “Surfing Madonna” and “Stabbing Poseidon,” which appeared within months of each other, offers us insight into this inquiry.

The mosaic known as the “Surfing Madonna” mysteriously showed up under a bridge in Encinitas before Easter Sunday, and has garnered a following from locals and beyond.  Visitors flocked to the site of the mosaic to catch a glimpse of the “Surfing Madonna” before it was to be removed from the concrete wall underneath an railroad bridge of the beach town.  The mosaic seemed to arrive out of thin air –a beautiful rendering of a 10-foot square of stained glass and stone of Our Lady of Guadalupe in prayer-stance, donning an enigmatic Mona Lisa smile, reports the LA Times.

Sadly, because the mosaic didn’t have city authorization, Mark Patterson, 58, a long-time local who came forward in June to claim responsibility for the artwork had to fork up an initial $500 fine.  He also will be reimbursing the city $2,125 for the art consultant hired to evaluate an efficient method of removing the mosaic without shattering it. 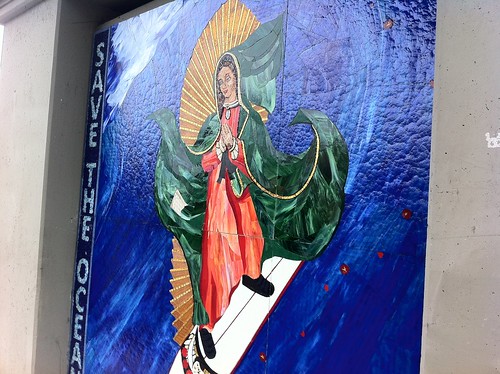 Supporters of the “Surfing Madonna” rallied together on Facebook and Twitter to voice their concerns over the removal of the beloved art work.  Tributes like photographs, flowers, and the occasional votive candle surrounding the mosaic further demonstrates how much the art piece was prized and valued among locals, who, unlike certain city officials, viewed the “Surfing Madonna” as a flavorful addition to the city.

Like the “Surfing Madonna,” the “Stabbing Poseidon” mysteriously appeared on the brick exterior of Winston’s nightclub in Ocean Beach without anybody noticing a few days before the summer solstice.

An art work, also, beautifully rendered on a 10-foot-square mural, but this time in spraypaint, the similarities between the two guerrilla art pieces are endless.

Pilgrims from far and wide and close to home paid tribute to the Stabbing Poseidon by taking photos and leaving calamari, reports the San Diego Reader.

The removal of the work, labeled as graffiti by city officials, has sparked outrage among locals who posted their concerns via MySpace and LiveJournal after hearing the news of the dismantling of the raging sea god’s throne.

Long-time local, Randall McGee, 85, who came forth early in June for authorship, is fined $50,000 and will have to pay for the removal of the “Stabbing Poseidon” from the nightclub wall.

Although both the renderings of “Stabbing Poseidon” and “Surfing Madonna” had to be taken down shortly after their unveilings, both seek to relay this environmental message: Save the Ocean.

The message went further to reach city officials, who hired a Greek oracle last month to determine the validity of the Stabbing Poseidon’s prophecy on the nightclub wall: “Save the Ocean or Perish by My Fury.”

After Japan, nobody was taking any chances.

It took Randall McGee nine hours to bring the “Stabbing Poseidon” to life, and according to the San Diego Reader, McGee intended the spraypainted masterpiece to be a gift to the community.

“It seemed like the perfect spot to get the message across that the ocean is in crisis and its protector is girding for battle.  We’re facing mass extinction – the eradication of man from the planet.  That’s really the point of all this…trying to help people wake up,” said McGee in the Reader.

Whether the message behind these masterpieces were condoned or not and as short-lived as they were, they certainly had far reaching effects, doing what most art works these days are unable to do: literally, amassing art appreciation county-wide among locals and even beyond while causing the city to react almost instantaneously.  The end-result being nearly priceless.

Photo Courtesy of Jill Clardy and Rubywhite via Flickr