The Man Behind the Latino Film Festival: March 11th through 21st 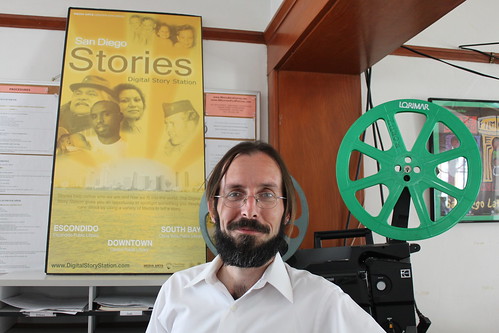 Local media hero, Ethan van Thillo, works tirelessly for the San Diego film scene. Actually, he works to foster and nourish not only “the film scene” but also the media arts scene of San Diego. You see, van Thillo is the founder and Director of the non-profit organization known as the Media Arts Center San Diego, and he has not only dedicated his life to helping others create, promote, and show their media projects, but he has helped build some remarkable and far-reaching projects that are changing the way people think about story-telling and altering the notions of exactly who can be a media-maker.

The Media Arts Center San Diego is the organization behind the very successful Latino Film Festival held this year March 11 through 21st at the UltraStar Mission Valley Cinemas. This popular festival, complete with corporate sponsors, concerts, and weeks of celebration, has been extremely well attended by not only the general public but by Hollywood and Mexican film and television stars. Initially (17 years ago) van Thillo began the Latino Film Festival as “Cine Estudiantil,” a student film festival for Chicano and Native American filmmakers, and it is the under-represented voice that van Thillo’s is still most passionate about promoting. He cares deeply about supporting the work of diverse, emerging filmmakers, and helping those who wouldn’t necessarily have access to filmmaking equipment get their hands on the tools they need. It was this drive that started him out on his career path and caused him to push the Latino Film Festival’s success into a non-profit, community oriented media center.

The year was 1990, and a young Ethan van Thillo was enrolled at UC Santa Cruz in a Chicano Studies course with Professor Armando Valdez. As part of a final project certain students were asked to organize a Chicano film festival. Van Thillo elected to join this group, and it seemed that he found his calling (or at least part of it).

“I’ve always been an organizer,” van Thillo explains. “I think there was something inside me that said, well I just can’t do it one time. When I organized the first festival as part of the class, I knew. Once I decide to do something I’m gonna do it again.”

Sure enough, after graduation, van Thillo moved to San Diego and began organizing film festivals, but he soon discovered he wanted to do more than just screen films. He wanted to help people create the projects, help local filmmakers network, and help facilitate a community of all different kinds of media-makers. The Media Arts Center San Diego was born. Workshops for media makers, screenings by local filmmakers, and networking events (and later social networking websites) were formed around the idea of “Changing Lives Through Film,” the center’s tagline.

Today the center is involved in a number of diverse and important projects, but when van Thillo is asked which of these many ventures is his favorite, his baby, he smiles and talks about The Teen Producers Project.

This project, started in 2000 is probably the coolest and most honorable mission being undertaken by van Thillo and the Media Arts Center. Initially the project was designed to give under-privileged and at-risk kids the chance to use camera equipment, computer-editing software, and give them the instruction in hands-on video making. The teens, largely from immigrant or refugee communities, participate in a 15-week after-school program that has now evolved into a kind of self-sustaining, youth-produced media production company and a very empowering experience for all students involved.

Today, local organizations and companies can hire the Teen Producers Project to create documentaries, Public Service Announcements, and other promotional and educational media tools. The students do these types of commercial projects, and they also make creative works on issues relating to them personally. For instance, last year students created videos on the idealized vision of the American Dream versus its actual realities for them and their families.

“The Teen Producers Project really completes the circle,” van Thillo says. “It’s not just about exhibiting films here at the Media Center it’s about producing films. Now we’re able to help youth to make their own films and eventually they will go on to be directors and cinematographers and screen their work at the Latino Film Festival.

We’re teaching kids to participate in the whole cycle of things–they’re not just viewers but producers.”

Recently, Media Center San Diego, in partnership with the City of San Diego Public Library, created a new project called The Digital Story Station. The overarching goal of this project is to give the public open-access to all the technical equipment they need to create documentary-style narratives about anything they find important. These “stations”, which include a computer, camera, scanner, microphone, and other media equipment, and are housed in public libraries, and anyone can go use the station to create his or her own story, which will live both in the library and in an online public archive at digitalstorystations.com. This project’s success has spread. Now there are over 30 libraries all around the state with Digital Story Stations, and the Media Center San Diego creates the stations, installs them, and trains librarians to help the public use them.

“Your story is just as important as anything else on collection in the public library,” Van Thillo says. “This has allowed everyone to participate, from 90-year olds to twelve-year olds. It’s not about making these huge documentaries; it’s about making what you have to say accessible. We don’t want people to be afraid of technology. The idea is to make it quick, simple, simple storytelling.”

Around the Media Arts Center, which is a two-story craftsman house in South Park, you’ll find a buzz of activities. There may be senior and student volunteers answering telephones, employees organizing video productions, a Charter school holding classes in the living room area, and others setting up for local and international filmmakers. Editors and special effects artists often give free workshops in the evening to anyone interested. People of every age and color mingle around this amazing center that lately seems too small to van Thillo to house the non-profit and all its activities. 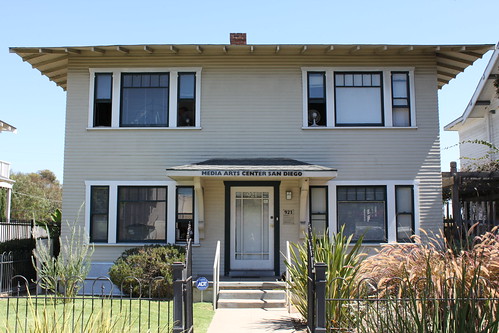 Even in these grim economic times, The Media Arts Center is actively looking to expand, and that is the sign of a great director and, to quote Victor Hugo, “an idea whose time has come.” Funding for the center is so varied, and the need for these services so great, that the center is seeking to develop another space to be used less for administrative operations and more for a community hang out, lounge and a location to hold various technology workshops as well as other future projects that may come along.

“We’re seeking to create the media arts center of the 21st century,” van Thillo says, “and we want to make the space and the technology accessible to everyone.”

Katherine Sweetman is a nationally and internationally exhibited artist in the fields of both new media art and documentary video. Her current work deals with online social networking sites and the issues surrounding personal disclosure in the public realm of the World Wide Web. Her major areas of research involve public disclosure of private information in both online and offline environments. She has an M.F.A. from the University of California, San Diego, a B.A. in Arts and Technology from California State University, San Marcos. She is currently a part-time instructor at Cal-State San Marcos and San DIego State University, and the Director of the alternative art space, Lui Velazquez, in Tijuana.