Bringing The Parisian Salon to San Diego, Thursday Nights at The San Diego Museum of Art

This Thursday, and every Thursday night throughout the summer,  The San Diego Museum of Art introduces The Summer Salon Series. This brand new weekly event will feature a handful of local contemporary artists each Thursday. The emerging and established artists will engage visitors in conversations, happenings, performances, readings, and displays set alongside the museum’s exhibition of work by the legendary Parisian artist, Toulouse-Lautrec.

The Henri de Toulouse-Lautrec exhibition, Toulouse-Lautrec’s Paris: Selections from the Baldwin M. Baldwin Collection, features a significant collection of Latrec’s infamous, sensual, and iconic illustrations that depict, among other things, such racy subjects as the women of the Montmatre and the Moulin Rouge. 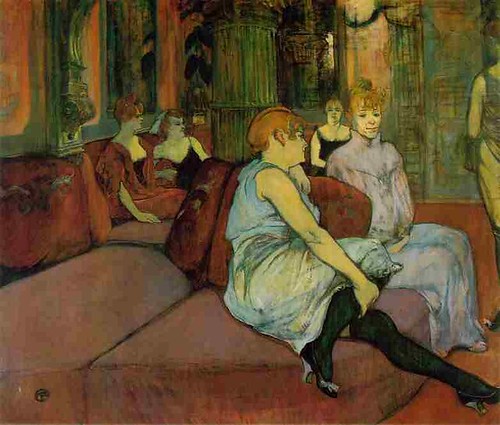 It was the Lautrec exhibtion that inspired this reinvention of the Salon, taking it from turn of the century Paris to the heart of Balboa Park and the San Diego Museum of Art.
“I honestly was just as attracted to the artist’s biography as much as his work,” said Alexander Jarman, Public Programs Manager for the Museum.

“This is one of our most important programs planned for 2010 and gives us the opportunity to educate through experiential learning. We want to turn the Museum into a platform, a stage if you will, to showcase the immense talent in our local art scene.  The Summer Salon Series allows people to learn about the legacy of Toulouse-Lautrec and understand the connection of contemporary, emerging art to the 3,000 years of art at the Museum.”

Each Thursday night, May 27th – September 2nd, the museum stays open late (until 9pm), serves wine and beer, and invites viewers to become participants in San Diego’s own art Salon. Inspired by the great bohemian Parisian Salons of the 1800’s and 1900’s, the SDMA Summer Salon will also be a space for conversation, poetry, debate, and a new level of engagement with the artwork.

This is not a traditional, quiet museum experience. At the Salon the audience plays an important role. Conversations are had. Libations are consumed. And with the exquisetly beautiful Balboa Park as a backdrop, something fantastic always takes place.

Katherine Sweetman is a nationally and internationally exhibited artist in the fields of both new media art and documentary video. Her current work deals with online social networking sites and the issues surrounding personal disclosure in the public realm of the World Wide Web. Her major areas of research involve public disclosure of private information in both online and offline environments. She has an M.F.A. from the University of California, San Diego, a B.A. in Arts and Technology from California State University, San Marcos. She is currently a part-time instructor at Cal-State San Marcos and San DIego State University, and the Director of the alternative art space, Lui Velazquez, in Tijuana.

← Previous Story Going Out: Where to have the most fun this Memorial Day Weekend
Next Story → Kick off June with more fun in San Diego